skip to main | skip to sidebar

I awoke several days in a row with a pain at the base of my neck and tingling sensations in my hands(sound familiar). Of course I was a male in his 30's with that feeling of invincibility; I dismissed it as overworking. I will freely admit I was and still am a workaholic. It was not unusual for me to work 80-100 hours a week. I often wonder if that wasn't my trigger (doc says no). The pains and sensations would not go away so I decided to go get it looked at. I begrudgingly arrived and waited what I thought was too long (he was worth it), now after about 15 minutes in his office he looked at me and suspected MS. What a shock! I thought I would hear about a pinched nerve and that I should get some rest. I was convinced as I left the office he was overreacting.

I awoke a mere 7 days later unable to walk straight and I threw up every time I made the attempt.

They moved me from ER to a room because it really looked like I would be staying a few days.
The docs started a battery of tests looking for things like cancer or brain tumors and other nasty stuff. Knowing what I know now I don't blame them MS normally does not present like this. I was unlucky to have my first good size lesion on a nerve center that sent crazy signals to all sorts of places in my body. I couldn't see, walk, eat or any number of bodily functions I don't want to talk about. They decided after seeing a spinal scan which was lit up like a Christmas tree (that's the phrase that was bandied about) that I needed a spinal tap. Spinal Taps are scary enough but I was so out of it I don't even remember the procedure.

The Neuro I had first visited came to my room and politely told me in his heavy Irish accent that I had Multiple Sclerosis. And I was actually happy to hear this after thoughts of tumors and such. I was promptly started on intravenous Solu-Medrol. After a few days on this powerful steroid I was able to kind of see again and the first thing I see is Maury Povich. Here comes the really frustrating part I could not change the station because my hands were not strong enough, to shut off the ignorant urban slang coming from the TV. Ah well the nurse meant well I looked bored and she left the TV on for me.

Thinking about a life without the use of my legs or 20/20 vision was not helping my mood or willingness to really try at rehab. As I made small gains in the use of my extremities, I was reminded of what I had lost by 80 year hip replacement patients walking faster than me. I am kind of a black and white logical sort of person but even when it looked obvious that I had contracted a debilitating disease I had yet to admit it to myself. I remember at one point asking the Doc if I could go home tomorrow and he looked at me with a very serious face and said you know you have something more serious than a cold. About then it hit home in the back of my head some place that I wasn't going to figure my way out of this as easily as I thought. So I knew I had something serious but I held on to my denial because it was my lifeline back to the way I was. I needed that because the outlook wasn't great the Doc said I might not get any better than I was currently. So denying that I would not stay in a wheel chair and I could work again was what I needed at that point.

Maury and the Great Escape

OK I promised a Happy Ending (not the naughty kind) so let's get to it. At this point I was hoping to have a dramatic moment to speak about because it makes for a better story. As these thoughts bang around my head I now realize it was just the combination of having my family around me and hanging on to my denial. Now being in denial is not a recommended mental state but it was working for me. I used my denial like motivational tool and that kept me from becoming depressed which didn't work for me at all. I thought if I refused to be disabled then I would not be (ah if it were only that easy). I had physical therapy (pt) at home 3 times a week and I was making small gains which I was able to build on. Taking those first few steps as cliché as it might sound was the key to making a recovery. Now here's where Maury Povich comes in again. I had just finished PT and was feeling pretty good. And again the TV was left on for my amusement and yes again Maury was on TV speaking to the legalities of if a brother and sister move away from the hills, are they still legally married?(I'm kidding but it was something equally as ridiculous). However this time my hands were strong enough to work the remote. But damnit the remote was across the room and so was my cane after PT. With a will of steel and burning desire to change the station; I got up took the 5 or so steps retrieved the remote and banished Maury from my TV once and for all. Now this might not sound so amazing but it was a huge step, and at that point I never looked back. My recovery came rapidly at that point because I think I tried even harder than before. Now what I really wanted to do was to get back to work. My T-shirt shop was not far away but they had asked me not to drive for obvious reasons. But luckily they had not taken away my license just hidden my keys. After seeing the coast was clear I did a few John Belushi moves (aka Animal House), and then made a break for the car and sped off to my shop which I hadn't been to in months. Thank God I had some good employees and good friends they kept it running and even picked up business that wasn't there before.

I still wake every morning and walk like the tin man from Wizard of Oz, but after my second cup of coffee most people would not know there was anything going on with me. I still have a few bad days but they are few enough that it has not been a problem. The shop has grown to a 15 person shop with embroidery, screen printing and digital services. But the real happy ending was staying home long enough to realize I needed a balance between home life and work. So I don't know if you can call MS a gift but it did help me set some priorities.
Posted by Unknown at 8:11 AM 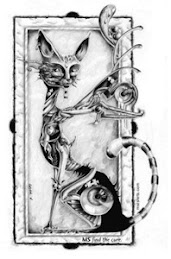 buy a shirt,help an MS artist, find a cure